StrikeForce Kitty features 6 unique worlds filled with challenging levels and various enemies. With cute graphics and witty storytelling, fight your way through entertaining levels to reach and rescue the princess. Each one of your four cats has three stats: health, strength, and speed. 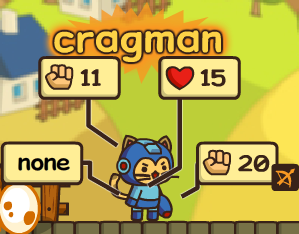 In spite of all, the game is still very cute. The fighters, the princess and even enemies are lovely kitten. Moreover, on the way to find the princess, the kitten soldiers can collect fish to up level or collect milk for more power. This is very cute, the kittens with fish and bottles of milk. Additionally, the background music is bright and happy, which matches with the cute kitten soldiers and their mission. Besides, there are many clothes and weapon that you can equip your kitten soldiers. This game is suitable for anyone who loves cats or kittens, especially the children who likes lovely things like this game.

Because the game is very suitable for the children, the controls of the game are very easy to understand. You just have to use some keys on your key board and your mouse.
– Use the arrow keys to move, jump up when you face with hinder, jump down.
– Use the mouse to choose what you want to equip your kitten.

There are not so many options in this easy game. The game just have, pause, resume, again and main menu options for you to stop the game for a while, resume the game after pausing, play again and come back to main menu. You can turn off the music too, but I don’t think you should turn off that cute music.
Now are you ready to rescue the princess?

These sly foxes! Still weak from the previous encounter with the heroes of the cat kingdom, the fox king made a pact with raccoons, and they’re at the doorstep of Great Kitty castle in StrikeForce Kitty Last Stand! Gather your forces and provide a swift response to your unwelcome visitors. It’s time to hiss and bare your claws, so rally your kitties and show them that you are not entertaining guests at the moment!

Everyone's favorite cat team is back to business in this new adventure and they’re ready to scratch some faces! StrikeForce Kitty Last Stand takes you back to the cat kingdom to help the cat king and his furry subjects with the nasty raccoon problem they’re facing. Due to the heroic actions of the kitty squad, the fox king and his forces need aid in their malevolent actions. While his army of foxes is resting and recovering, the fox king has paid raccoons to attack the cat kingdom! Muster your kitties at the castle and get ready to face them. In StrikeForce Kitty Last Stand, your objective is to defeat the waves of enemies by attacking them. The game keeps its signature feature, the costumes, and you can collect these stylish ensembles from your fallen enemies. There are dozens of different costumes for both ranged and melee categories. Each of these costumes grants different perks, from improving attack power to increasing your defense! In addition to costumes, you can collect fish crackers from your fallen enemies. These are the favorite snacks of the cats in the kingdom, and you can use these crunchy treats to upgrade the stats of your feline warriors! Show those raccoons they've signed the wrong contract and the fox king is doomed to failure in his every attempt of conquering the cat kingdom! Purrfect!

Cats in this kingdom are so adventurous and brave! Here at Kizi, you can join these fierce yet cute felines in their adventures. Visit our StrikeForce Kitty games collection and help the cat kingdom! Have fun playing!

Deqaf Studio developed this game, as well as the first game of the series StrikeForce Kitty 1.

Use your mouse to play this game.