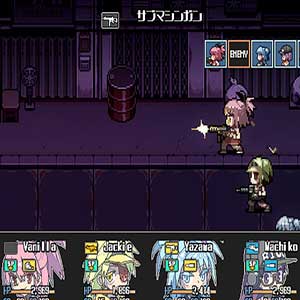 This is a Press Release by, Grayfax Software and PLAYISM

TOKYO – Jan. 14, 2019 – Orangeblood, developer Grayfax Software and publisher PLAYISM‘s RPG inspired by ’90s hip-hop, sags its jeans, throws on a new t-shirt, and breaks out some fresh sneakers for its debut today on PC via Steam.

The procedurally-generated weapons of Orangeblood are as dangerous as the setting – the man-made island of New Koza. It’s up to Vanilla, a prisoner released to execute a top-secret mission, to build a cute yet tenacious crew to free herself from the warring gangs ruling the underworld in an alternate version of 90s Japan overflowing with mobsters, robots, and many more threats.

Foes and chests drop powerful guns as well as protective kicks with randomized stats to mix and match for maximum damage. Time your ammo reloads strategically to avoid getting caught off-guard with lowered defenses. The hand-drawn pixel streets of New Koza ooze danger, but vending machines scattered throughout the city will provide solace in Vanilla’s time of need.

Orangeblood will be available on Steam in Japanese, English and Simplified Chinese for $19.99 USD.

Based out of Tokyo, Japan, Grayfax Software is a one-man game studio, with Orangeblood being it’s first published title.