Carmageddon is the original freeform driving sensation, where pedestrians(and cows!) equal points, and your opponents are a bunch of crazies in atwisted mix of automotive killing machines. The game features anarchicdrive-wherever-you-like gameplay and over-the-top surreal comedy violence.It’s the racing game where racing is for wimps.Now the same Mac & PC classic that was BANNED AROUND THE WORLD is back!Carmageddon features real-world environments that have been turned intokilling fields, where the locals stay out on the streets at their peril. Aswell as using your car as a weapon, every level is sprinkled generously withpower-ups that have a vast variety of mad effects, adding a whole extra levelof craziness to the proceedings. In every event you have the option to“play it your way”… Waste all your opponents, kill every pedestrian, or(perish the thought) complete all the laps. Oh and watch out – the cops intheir super-tough armoured patrol vehicles are lurking, and if they catch youbeing bad they’ll be down on you like several tons of cold pork.*'Ladies and gentlemen, start your engines! Members of the public, you haveONE minute to reach minimum safe distance!'* * Crazy range of vehicles and drivers, each with their own personality and driving style. * The game that pioneered true 3D physics, * The game that pioneered dynamic vehicle damage * The game that pioneered splattering grannies. And cows. * In fact, splatter a wide range of seriously scared pedestrians. * 28 dangerously deranged Opponents * 11 wildly exhilarating Environments * Career Mode featuring 36 satisfyingly violent Levels * Race and Wreck opponents to unlock 30 playable cars! * Over 40 fun-packed Power Ups and “Power Downs”. * Great open world track design allowing complete freedom to explore. * Hidden bonus areas to find. * Ludicrously satisfying, arcade-style gameplay.The aim is for the player to work their way up the ranking system, from 99thplace to first. The player vehicle is pitted against a number of computercontrolled competitors, in locations such as cities, mines and desert towns.Levels can be beaten in one of three ways: * Completing all the laps of the race course, as one would a normal racing game. * 'Wasting' (wrecking) all the opponents vehicles. * Killing all the pedestrians in the area.Each level has a time limit, but more time may be gained by passing throughcheckpoints, collecting powerups, damaging/destroying the competitors' cars,and by running over pedestrians (with bonuses awarded for style).These actions also reward the player with Credits, which can be used to makeinstant repairs or recover the car (after falling down a chasm, for example).They can also be used to upgrade Armour, Power and Offense stats in the PartsShop between races. This is also the time to switch which car to drive ifothers have been obtained.As well as opponents partaking in the 'race', some levels also contain anumber of heavily armored Cop Cars, which will activate their sirens andhound the player when provoked. They can be attacked and destroyed, but donot count as opponents. A single 'Super Squad Car' exists in one level, andit can be claimed if destroyed.An Action Replay with multiple camera viewpoints is available at any pointduring a race.Carmageddon won the /“Game of the Year”/ trophy in the 1997 *PC Zone*Reader awards.Carmageddon 1 & 2 were /“Driving Game of the Year”/ 1997/1998.SELECTED REVIEWS OF THE ORIGINAL GAMEOriginally released for the PC in 1997, Carmageddon was an instant hit andthe titles went on to sell over 2 million copies worldwide. Here’s what asample of the gaming press thought at the time:/“Carmageddon is visceral, violent, vehicular fun...”/ - *GameSpot* 8.8out of 10/“Carmageddon, to get straight to the point, is one of the best computergames I've ever played… Carmageddon is God!”/ - Duncan McDonald 95%Classic Award *PC Zone* Magazine/“Carmageddon is one of those games that only come along once in a bluemoon. An essential purchase.”/ - *Escape* Magazine 6 out of 6/“The gameplay is spot on and anyone with a dark enough sense of humourshould give it a go.”/ - *Computer Gaming World* 4 out of 5/“So next time you gun down coppers on GTA VI, just remember,Carmageddon’s controversy was there first, and you have a lot to thank itfor.”/ -* RetroGarden*Carmageddon is the first of a series of graphically violent driving-orientedvideo games. It was conceived and developed by Stainless Games, published bySCi and released June 30, 1997 on PC & Mac.It was, and remains, a poster child for video game controversy. Thecontroversy surrounded the game's central premise; that of earning reward forrunning down innocent pedestrians.The game was notable for its realistic and ground-breaking physics, and forits in-game action replay features. It was also one of the earliest examplesof a sandbox 3D driving game, and may have influenced other later gamesincluding the Driver and Grand Theft Auto series.ABOUT STAINLESS GAMESStainless was founded in 1994 by Patrick Buckland, a veteran of the gamesindustry going back to the Jurassic period of 1982, and Neil Barnden, whoused to have hair like a mammoth. A team of 8 worked on the originalCarmageddon at Stainless, and 5 are still with the company today, although acouple of them are now kept manacled in a small padded room in the cellar.Stainless Games now employs around one hundred mad, dedicated people ofassorted gender, height and width. They can all be found danglingprecariously from a small chalky rock just off the South Coast of England.http://www.carmageddon.com/bugger [1]http://www.carmageddon.com [2][1] https://steamcommunity.com/linkfilter/?url=http://www.carmageddon.com/bugger[2] https://steamcommunity.com/linkfilter/?url=http://www.carmageddon.com

Go to the configuration file location.; Open OPTIONS.TXT (Steam) or DATA.TWT (GOG.com, 3dfx).; Find the line containing Yon 35.000000 and increase the value to Yon 70.000000 or more. Game Details: Welcome to the “Carmageddon 2” for Mac game page. This page contains information + tools how to port Carmageddon 2 so you can play it on your Mac just like a normal application using Crossover.So if you haven’t Crossover yet, then sign up here and buy the program or if you want to test it first, for the 14 days trial. Or use the Porting Kit alternative. For Carmageddon on the Macintosh, GameFAQs has game information and a community message board for game discussion. Carmageddon is the original freeform driving sensation, where pedestrians (and cows!) equal points, and your opponents are a bunch of crazies in a twisted mix of automotive killing machines. 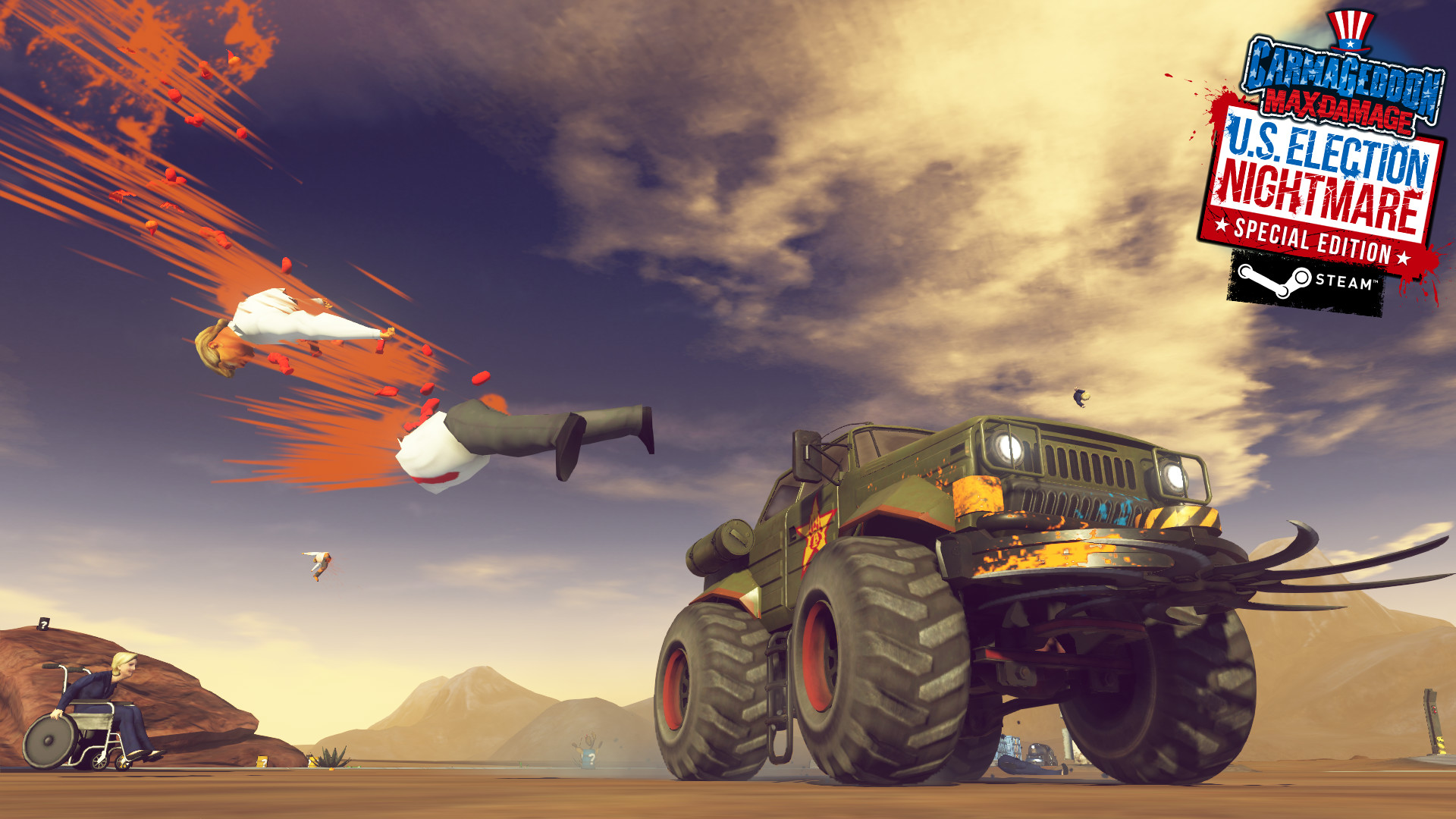 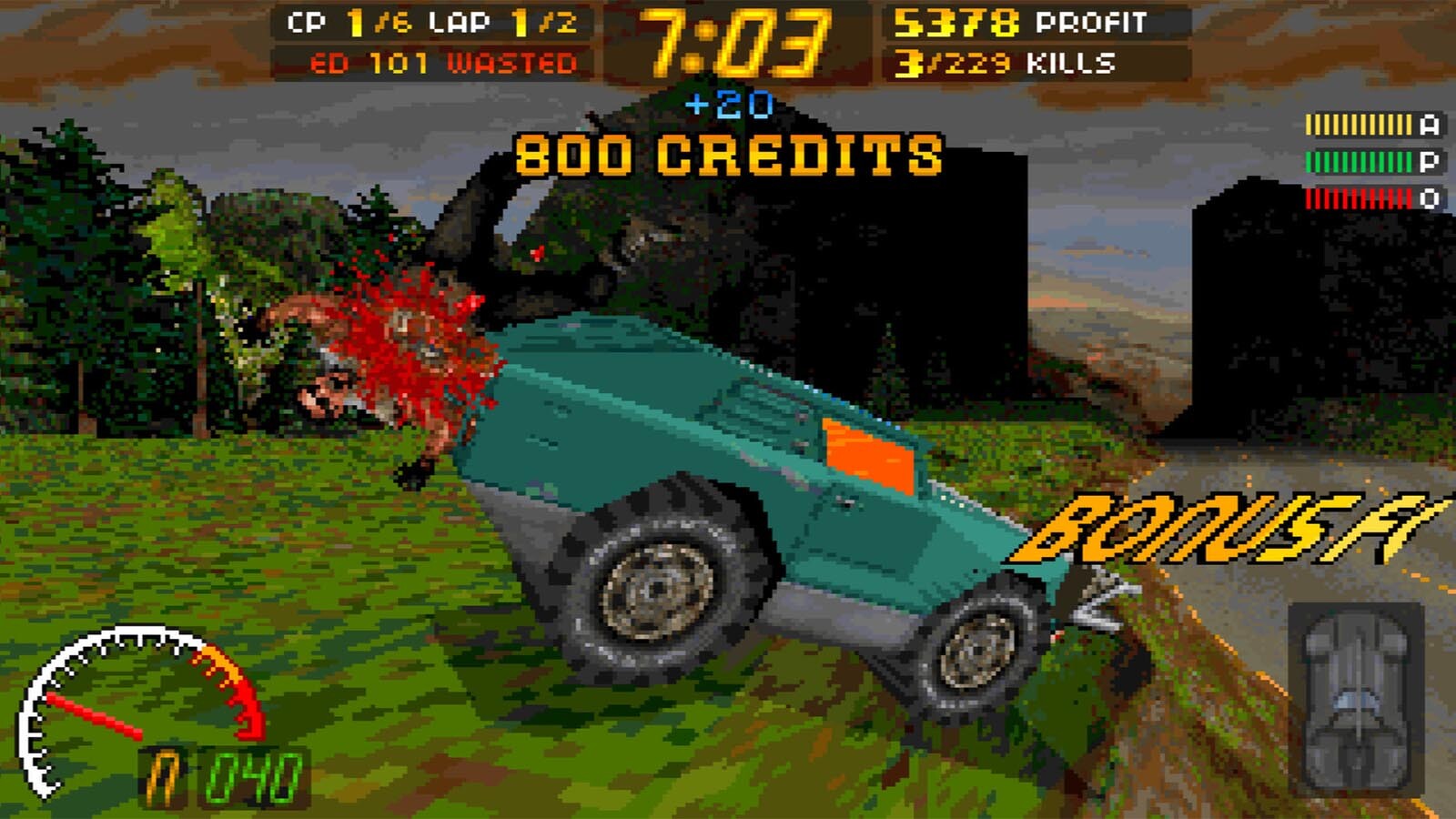 Carmageddon is a vehicular combat video game released for personal computers in 1997. It was later ported to other platforms, and spawned a series of follow up titles. The game was produced by Stainless Games and published by Interplay Productions and Sales Curve Interactive.

In 2011, Stainless Games obtained the rights to Carmageddon from former company Square Enix Europe. In June 2012, it was announced that a new port of the game would be released for iOS and certain Android mobile devices. The game was released as both a free demo and paid game in 2013. In December 2018, THQ Nordic acquired the rights to the Carmageddon series from Stainless Games.

In Carmageddon, the player races a vehicle against a number of other computer controlled competitors in various settings, including city, mine and industrial areas. The player has a certain amount of time to complete each race, but more time may be gained by collecting bonuses, damaging the competitors' cars, or by running over pedestrians. Unusual for a racing game, checkpoints do not extend the time limit.

Races are completed by either completing the course as one would a normal racing game, 'wasting' (wrecking) all other race cars, or killing all pedestrians on the level. The game includes thirty six race tracks, played across eleven different locations.

The game featured three songs (in instrumental format) from Fear Factory's 1995 album Demanufacture. The title track and 'Body Hammer' are both included with the song 'Zero Signal' being used in the game's intro.

Screenshots from the game Carmageddon