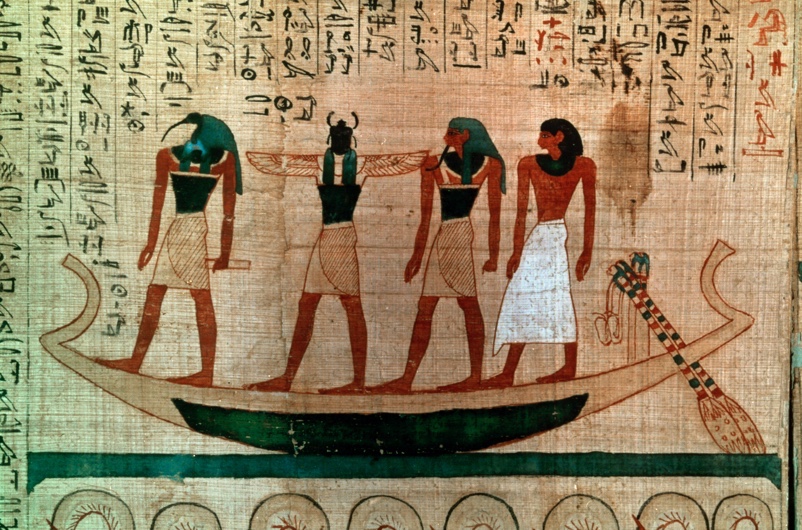 The Pyramids of the Old Kingdom

Known as the “Age of the Pyramids,” the Old Kingdom was characterized by revolutionary advancements in architecture.

Describe the layout and function of the Pyramids of Giza

Predynastic Egypt and its sequel, Egypt: Old Kingdom, both from Russian studio Clarus Victoria, distil the satisfaction of early-game Civ into a thick marmite, and spread it over two games and around eight hours of play. Egypt Old Kingdom is a turn-based strategy, built on the history of the I-VIII dynasties of Ancient Egypt. Take on the role of tjati - the royal viziers, governing the state on behalf of the great pharaohs. Manage resources, assign workers, found new districts, build temples and palaces and discover the amazing history of Ancient Egypt. For almost 30 centuries—from its unification around 3100 B.C. To its conquest by Alexander the Great in 332 B.C.—ancient Egypt was the preeminent civilization in the Mediterranean world. The Old Kingdom lasted from 2686 to 2181 B.C.E, which included the third through sixth dynasties. The capital of the Old Kingdom was located in Memphis. With the Old Kingdom came prosperity and glory as shown through the massive creation of the greatest and largest pyramids in Egyptian history. Considered the 'golden age' of the Old Kingdom, the Fourth Dynasty (2,613 BC– 2,494 BC) was a time of relative peace and prosperity during which trade with neighboring regions provided pharaohs with the leisure to explore artistic and cultural pursuits and the resources to build on a much grander scale.

The Old Kingdom of Egypt existed from the third through the sixth Dynasties (2686 BC–2182 BC). A period of political stability and economic prosperity, it is characterized by revolutionary advancements in royal funerary architecture. Both Egyptian society and the economy were greatly impacted by the organization of major state-sponsored building projects, which focused on building tombs for their kings. These tombs were built in the form of great pyramids, and for this reason, the Old Kingdom is frequently referred to as the “Age of the Pyramids.”

Evolution of the Mastaba

During the Old Kingdom, royal mastabas eventually developed into rock-cut “step pyramids” and then “true pyramids,” although non-royal use of mastabas continued to be used for more than a thousand years. As the pyramids were constructed for the kings, mastabas for lesser royals were constructed around them. The interior walls of the tombs were decorated with scenes of daily life and funerary rituals . Because of the riches included in graves, tombs were a tempting site for grave-robbers. The increasing size of the pyramids is in part credited to protecting the valuables within, and many other tombs were built into rock cliffs in an attempt to thwart grave robbers.

Mastaba schematic: Inside the mastaba, a deep chamber was dug into the ground and lined with stone or bricks. Over time these tomb chambers sank more deeply and were connected by stairs. The above-ground structure had space for a small chapel to which priests and family members could bring offerings for the soul of the deceased.

Example of a Mastaba: Royal mastabas were used to mark burial sites of many important Egyptians.

The first king to launch a major pyramid building project was King Djoser, who ruled in the 3rd Dynasty. He built his famous “Step Pyramid” at Saqqara, not far from the capital city of Memphis (near modern-day Cairo). In the following dynasties, the pyramid design changed from the “step” pyramid to a true pyramid shape as kings continued to build tombs for their kings. Among these, the Pyramids of Giza are considered the greatest architectural achievement of the time.

Step Pyramid at Saqqara: Djoser’s step pyramid was the first of the great pyramids built during the Old Kingdom in Eqypt. Unlike later pyramids, it used a step design that is easily recognized.

The Pyramids of Giza

The Pyramids of Giza, also known as the Giza Necropolis , are one of the oldest remaining wonders of the world. The Necropolis includes three pyramid complexes: the Great Pyramid (built by King Khufu of the 4th Dynasty); the somewhat smaller Pyramid of Khafre (buit by Khufu’s son); and the relatively modest-sized Pyramid of Menkaure.

The Necropolis also includes several cemeteries, a workers’ village, an industrial complex, and a massive sculpture known as the Great Sphinx. The Great Sphinx is a limestone statue of a reclining sphinx—a mythical creature with a lion’s body and a human head. It is commonly believed that the head is that of King Khafra, who ruled during the 4th dynasty. It is the largest monolith statue in the world, standing 241 ft long, 63 ft wide, and 66.34 ft high.

Albumen print of the Sphinx of Giza, partially excavated, with two pyramids in background: The Great Sphinx of Giza is the largest monolith statue in the world and was believed to have been built for King Khafra during the 4th Dynasty.

We still do not know exactly how the huge and impressive stone monuments were built. Most of the stone for the interior seems to have been quarried immediately to the south of the construction site. The smooth exterior of the pyramid, however, was made of a fine grade of white limestone that was quarried from the other side of the Nile River. These exterior blocks had to be carefully cut, transported by river barge to Giza, and dragged up ramps to the construction site. Theorists disagree as to the method by which the stones were then put into place and how possible the method was. It’s also possible that the architects developed their techniques over time.

The sides of all three of the Giza pyramids were astronomically oriented to the north-south and east-west within a small fraction of a degree. To ensure that the pyramid remained symmetrical, the exterior casing stones all had to be equal in height and width. Workers might have marked all the blocks to indicate the angle of the pyramid wall and trimmed the surfaces carefully so that the blocks fit together.

The work of quarrying, moving, setting, and sculpting the huge amount of stone used to build the pyramids might have been accomplished by several thousand skilled workers and unskilled laborers. Evidence from the tombs indicates that a workforce of 10,000 laborers working in three-month shifts took around 30 years to build a single pyramid.

In order to preserve the body and, therefore, the soul of the deceased, Egyptians used the process of mummification. This involved removing the internal organs, wrapping the body in linen, and burying the mummy in a rectangular stone sarcophagus or wooden coffin. Because it was believed that the deceased would continue his or her earthly life in the afterlife, accommodations were made to ensure this transition. The Opening of the Mouth Ceremony was a ritual involving the symbolic animation of a mummy by magically opening its mouth so that it could breathe, speak, eat, and drink in the afterlife.

Many mummies were provided with some form of funerary literature, often consisting of spells and instructions for navigating the afterlife. During the Old Kingdom, only the pharaoh had access to this material, which scholars refer to as the Pyramid Texts . The Pyramid Texts are a collection of spells to assure the royal resurrection and protect the pharaoh from various malignant influences.

Sculpture of the Old Kingdom

Egyptian artisans during the Old Kingdom perfected the art of sculpting and carving intricate relief decoration out of stone. 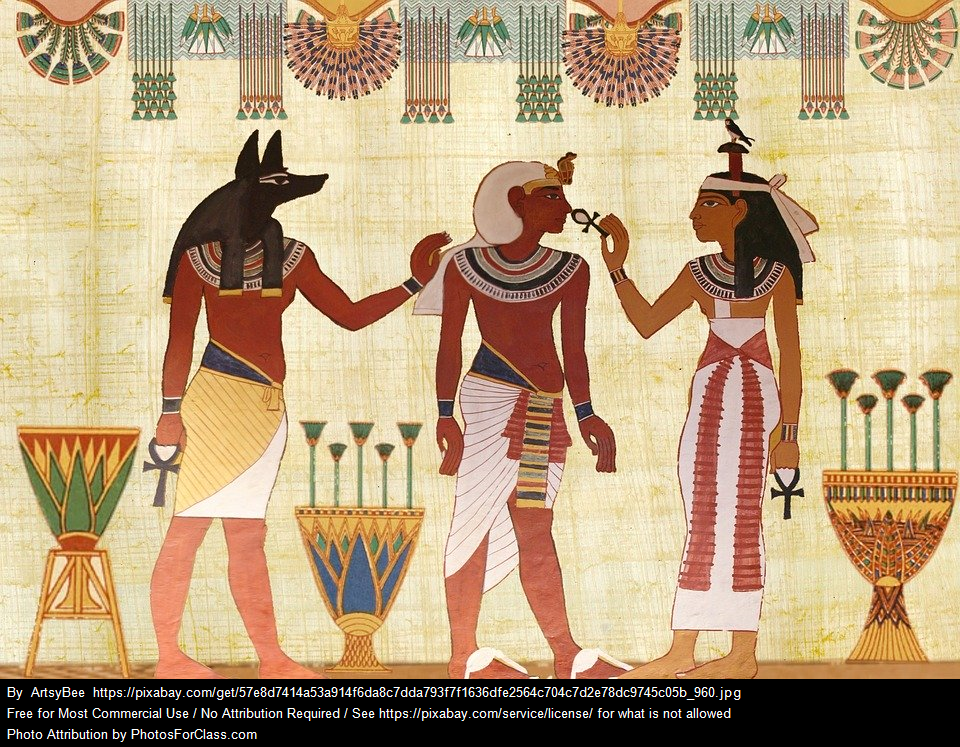 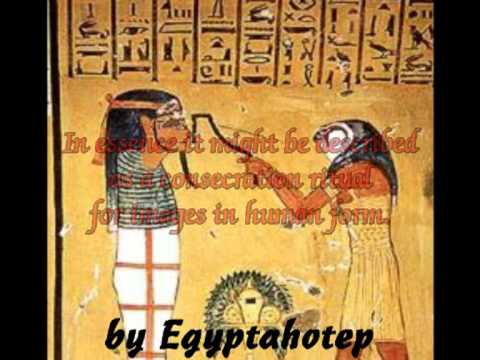 Egyptian sculptors created the first life-sized statues and fine reliefs in stone, copper, and wood. They perfected the art of carving intricate relief decoration and produced detailed images of animals, plants, and even landscapes, recording the essential elements of their world for eternity in scenes painted and carved on the walls of temples and tombs. Kings used reliefs to record victories in battle, royal decrees, and religious scenes, and sculptures of kings, goddesses, and gods were common as well. Sculptures from the Old Kingdom are characteristically more natural in style than their predecessors. Toward the end of the Old Kingdom, images of people shifted toward formalized nude figures with long bodies and large eyes.

Egyptian sculpture of the Old Kingdom: This sculpture was created in the Fourth Dynasty, and represents the goddess Hathor, King Menkaure, and the goddess Bat.

The Great Sphinx, located among the Pyramids of Giza, is the largest monolith statue in the world, standing 241 feet long, 63 feet wide, and 66.34 feet high. Carved out of limestone , it represents a mythical creature known as a sphinx, with a lion’s body and a human head. It is commonly believed that the head of the Great Sphinx is that of the Fourth Dynasty (2680-2565 BCE) pharaoh Khafre, whose pyramid stands directly behind the giant sculpture.

While most sculptures were made of stone, wood was sometimes used as a cheap and easily carved substitute. Paints were obtained from minerals such as iron ores (red and yellow ochres), copper ores (blue and green), soot or charcoal (black), and limestone (white). Paints could be mixed with gum arabic as a binder and pressed into cakes, which could be moistened with water when needed.

By the Fourth Dynasty, the idea of the ka statue was firmly established. Typically made of wood or stone, these statues were placed in tombs as a resting place for the ka, or spirit, of the person after death. Other sculptural works served as funerary art, accompanying the deceased in burial tombs with the intention of preserving life after death. Strict conventions that changed very little over the course of Egyptian history were intended to convey the timeless and non-aging quality of the figure’s ka.

The Fourth Dynasty also witnessed the production of so-called “reserve heads,” plain and hairless naturalistic busts found primarily in non-royal tombs. Each head bears a striking individuality despite many common features, leading to the argument that they were portraits. Some scholars believe that they were intended as the commoners’ equivalent of ka statues, although the exact purpose remains a matter of debate.

Reserve heads (c. 26th century BCE): These individualized busts might have been the commoners’ equivalent of the ka statue, but the exact purpose remains unknown.

Very strict conventions governed the crafting of deity figures, and these rules were followed so strictly that over three thousand years, the appearance of statues changed very little. For example, the sky god (Horus) was to be represented with a falcon’s head, while the god of funeral rites (Anubis) was to be always shown with a jackal’s head.

In addition to funerary art, Egyptians surrounded themselves with objects to enhance their lives in this world, producing cosmetic vessels and finely carved and inlaid furniture. Over time, Egyptian artists adopted a limited repertoire of standard types and established a formal artistic canon that would define Egyptian art for more than 3,000 years while remaining flexible enough to allow for subtle variation and innovation.