MPEG Streamclip (Mac) is a very simple application and using it is just as easy. You need to drag and drop the file you want to process on top of the main window and then select the modifications you want to perform to that specific video. Once a video is loaded you can view and modify things like the Video PID, Audio PID and Audio mode as well. For those knowledgeable users looking for a free, simple video converter with multiple file options, including audio, MPEG Streamclip for Mac is a useful option. Best VPN Services for 2020.

MPEG Streamclip for Mac is a powerful high-quality video converter, player, editor for MPEG, QuickTime, transport streams, iPod. And now it is a DivX editor and encoding machine, and even a movie downloader.
You can use MPEG Streamclip for macOS to: open and play most movie formats including MPEG files or transport streams; edit them with Cut, Copy, Paste, and Trim; set In/Out points and convert them into muxed or demuxed files, or export them to QuickTime, AVI, DV and MPEG-4 files with more than professional quality, so you can easily import them in a DVD authoring tool, and use them with many other applications or devices.
Supported input formats: MPEG, VOB, PS, M2P, MOD,VRO, DAT, MOV, DV, AVI, MP4, TS, M2T, MMV, REC, VID, AUD, AVR, VDR, PVR, TP0, M2V, M1V, MPV, AIFF, M1A, MP2, MPA, AC3, and more.
It lets you play and edit QuickTime, DV, AVI, MPEG-4, MPEG-1; MPEG-2 or VOB files or transport streams with MPEG, PCM, or AC3 audio. The app can export all these formats to QuickTime, DV, AVI/DivX and MPEG-4 with high quality encoding and even uncompressed or HD video.
Video conversion is performed in the YUV color space; you can choose to scale video to any frame size using a professional 2D-FIR scaler (better than bicubic) but you can also leave it unscaled. Other optional video processing features include a powerful motion-adaptive deinterlacer, a field dominance converter, a chroma reinterlacer and an option to perform interlaced scaling instead of progressive scaling. Audio can be converted to uncompressed or to IMA, AAC, MP2 or AMR using the high-quality MP1/MP2/AC3/PCM built-in decoders of MPEG Streamclip for Mac; it is also kept in perfect sync with video using a timekeeping system.
It can save edited movies as MOV files, and (when possible) as AVI or MP4 files. Edited MPEG-1 or MPEG-2 files are saved as MPEG or TS files.
The program can also convert MPEG-2 transport streams into muxed MPEG-2 files, for immediate burning at full quality with most DVD authoring applications; it can also demux MPEG-1 and MPEG-2 files and transport streams with MPEG, AC3, PCM audio to M2V and AIFF (or M1A or AC3) files, for immediate burning at full quality with DVD authoring applications. A special demuxing option is available for use in QuickTime Pro: this application does not work well with M2V files, but the app can write a special 'unscaled' M2V file that preserves full video quality.
It can handle files and streams larger than 4 GB, split in any number of segments, or with multiple audio tracks, and can also optionally handle timecode breaks. It is compatible with MPEG-1 and MPEG-2 video, MPEG layer 1/2 (MP1/MP2) audio, AC3/A52 audio, and PCM audio.
The video player included in MPEG Streamclip lets you preview the files and transport streams before doing the conversion; it also lets you visually set the In and Out points for the conversion so you can convert just the part of the file you are interested in, and also cut commercials and other unwanted parts, or edit the stream and join two streams with Cut/Copy/Paste.
Also Available: Download MPEG Streamclip for Windows

Maybe you like using MPEG Streamclip to convert videos on Mac. It is not only free but is also one of the preferred software for video editing and conversion. You can basically edit and convert your video files to the output format of MOV, DV, MP4, AVI, DIVX and 3GP. As the software applies the QuickTime technology, it's by default that you can upload and play any QuickTime supported file formats as well. However, that might not always be the case. Your MPEG Streamclip might not work and prompt up messages such as 'won't read or open files' or 'unrecognized file format'. And lots of MPEG Streamclip users have recently discovered it couldn't get the files converted, and the malfunction occurred after they all upgraded to the system Mac OS X 10.14 macOS Mojave, Yosemite or Mavericks. For these cases, a great MPEG Streamclip alternative for Mac (Mac OS X 10.14 compatible) is the best choice for you.

As we know, MPEG Streamclip is a well-known video converter, player, editor. By contrast, EaseFab Video Converter Ultimate for Mac is the most outstanding alternative to MPEG Streamclip. The video app is an all-in-one video/audio converter, player, editor and fully compatible with all Mac OS X systems including Yosemite, Mavericks, Mountain Lion, Lion, etc. It is more easy-to-use and offers some unbeatable features like batch conversion and customized output settings for iPod, iPhone, iPad, Android, PSP, iMovie, FCP and more. Plus, it supports more video formats than MPEG Streamclip like WMV, AVI, AVCHD MTS, MKV, etc. That's the reason why it can be seen as MPEG Streamclip alternative and is even much better than MPEG Streamclip.

Below, I'll show you how to use this great MPEG Streamclip alternative to convert videos on Mac (macOS Mojave included) in high quality.

Step 2. Select one of the output format you want

Click Profile (located below where your files are displayed) and select the format you want from the drop-down list. Just below Profile is Output, here you can browse your computer for a better destination folder to save your converted movies. As you see, all regular video and audio formats like MP4, MOV, MKV, WMV, AVI, FLV, MP3, WMA, WAV, M4A, etc. are provided.

If you want to convert your movies for play on portable devices, including iPhone, iPad, iPod, HTC, Samsung Galaxy Tab S, Galaxy S5, S4, Nokia, SSony, PSP, Xbox 360 and more, you can simply browse to find the icon of your device and select it as the output format to get videos with optimized settings. All Idevices output files can be synced to iTunes automatically.

Click the 'Convert' button at the bottom-right corner of this intelligent MPEG Streamclip alternative for Mac app to start video conversion. In a minute, there will be a pop-up dialog box that shows you all tasks have been finished. And there is an 'Open' option in the dialog box. Just click it to locate the output files for uses. That's all. 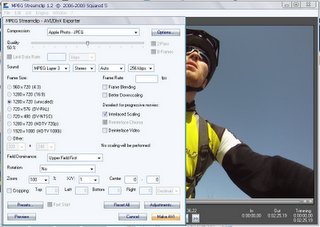 Note: MPEG Streamclip doesn't work on Windows 8.1 and Windows 8, for this case, you can get the Windows verison of EaseFab Video Converter Ultimate, which have the same functions as the Mac program.

How To Use Mpeg Streamclip